MANILA, Philippines – Senator Panfilo Lacson said Wednesday both chambers of Congress have agreed with the ruling of the Commission on Audit (COA) to stop using mere certifications as liquidating instruments for any of its expenditures.
“(We) agreed to submit ourselves to the disposition of COA, whatever COA says we will follow. And COA explicitly expressed that liquidation by certification will no longer be allowed, at least prospectively, starting 2013,” Lacson said in an interview.
Lacson said he and House Speaker Feliciano Belmonte sat down with COA chairman Ma. Gracia Pulido-Tan on the issue of liquidation of all funds appropriated to Congress, and they all agreed to rescind Concurrent Resolution No. 10 allowing Congress to liquidate Maintenance and
Other Operating Expenses (MOOE) by mere certification.
“It goes without saying that COA no longer recognizes liquidation by certification. It goes without saying Concurrent Resolution No. 10 is no longer in force,” Lacson said.
Lacson said he supported the contention of COA that under the Constitution, all branches of government should liquidate funds under rules on auditing and accounting procedures.
Lastly, Lacson said that COA rejected the proposal made by Senate Minority Leader Alan Peter Cayetano in a resolution for a parallel audit of the Senate by a private auditing firm.
x x x."
Posted by Atty. Manuel J. Laserna Jr. at 5:27 PM


MANILA, Philippines - A senatorial candidate in the 2013 midterm elections asked the Supreme Court on Monday, January 28, to compel Congress to pass a law banning political dynasties.
Ricardo Penson, president and CEO of Ausphil Tollways Corp and a senatorial hopeful, said the High Court should require lawmakers to enact a law against political dynasties, as mandated in the 1987 Constitution.
Sec.26, Article II of the Constitution specifies that "The State shall guarantee equal access to opportunities for public service and prohibit political dynasties as may be defined by law."
Penson noted that since the Constitution took effect 26 years ago, no law defining and prohibiting political dynasties has been passed.
His petition was filed shortly after a losing senatorial candidate of the Liberal Party in 2010 announced in a forum that he was leading a group that would seek the disqualification of 3 political dynasties -- the Pinedas of Pampanga, Villafuertes of Camarines Sur, and Dutertes of Davao City.
Lawyer Alex Lacson said there is no need to wait for a new law against political dynasties since there are legal definitions already set in previous decisions of the Supreme Court.
Lacson is bringing his group's petition straight to the SC, so the latter can compel the Commission on Election to immediately disqualify the members of the 3 families who are running for various local posts.
For his part, Penson asked that his petition be consolidated with the petition of former Vice President Teofisto Guingona Jr. and Dante Jimenez, founding chairman of the Volunteers against Crime and Corruption.
In 2012, Guingona, Jimenez and lawyers of VACC asked the SC to also compel the House of Representatives and the Senate to pass a law against political dynasties.
The SC has yet to act on petition. It has, however,affirmed its earlier dismissal of a petition that asked the Commission on Elections to implement the constitutional provision against political dynasties.
Penson earlier promised that if he wins, he will push for the passage of an anti-political dynasty law. He is also among the candidates who have vowed to abolish the pork barrel if they get elected. - Rappler.com
x x x."

The crime of “offending religious feelings” – for which Carlos Celdran was convicted is unconstitutional – believes Ibarra Gutierrez III, a criminal law professor at the University of the Philippines.
“I don’t think it’s constitutional,” he told me in an interview. 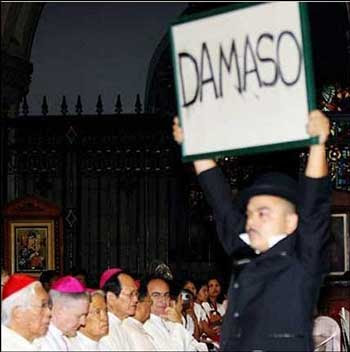 “First of all, it is strangely placed. It appears in one chapter of the Revised Penal Code – under “Crimes Against the Fundamental Laws of the State. Look at the other crimes (under this section). They all refer to a situation where a government official violates the Bill of Rights such as arbitrary detention, illegal search and seizure.
At the very last (of the same section), you have a crime that does not punish a government official who commits crimes against the Bill of Rights but a crime that offends religious feelings.

I looked and indeed the provision was strangely placed, tacked on like an afterthought.
The Bill of Rights does mention religion but only with respect to a person’s right to freely exercise it.

“has no business prosecuting crimes anchoring on religious feelings. The problem is, it calls upon the court to make a determination of what the religious faithful will find offensive…what will ridicule the church.”

He said this would mean that the court would have to make a judgment in relation to doctrines of a particular church.
Third, he called the crime “archaic” and a throwback to the Spanish colonial period when the native population in the Philippines was ruled by a theocracy and Church and State were one.
To non-lawyers like me, the name “Revised Penal Code” was highly misleading since it initially gave me the impression the revision was recent. It turns out our Code of Crimes was last revised back in 1930 yet. It replaced the previous Spanish Penal Code but apparently carried over quite a number of the latter’s provisions.
I asked Prof. Gutierrez to recall previous cases where the court ruled that religious feelings were offended.
He said one case was penned by the late Justice Jose P. Laurel before World War II. It involved a man who had a non-Catholic buried with Catholic rites in a Catholic cemetery.
Another more recent case involved a man who – during a religious rally of the Iglesia ni Cristo, had climbed the stage and started debating with the church minister. In that case, he said, the lower court convicted the man. But on appeal, he was acquitted because the judge ruled that a religious rally held in a public plaza is not a religious ceremony, he explained.
So I guess Prof. Gutierrez has just answered a question I had posed earlier – if the Catholic Church chooses to have an outdoor religious ceremony-cum-rally against the reproductive health law, can those who might hold counter-rallies in the vicinity be held liable for offending religious feelings?
Gutierrez added that even if the Church holds a mass during a public rally, the gathering cannot be considered a “religious ceremony” defined under Section 133. “Not even if you do something offensive,” he said.
Still another case of initial conviction involved a drunken man who had entered a church while singing was going on during a service and who tried to grab the mike. The Court of Appeals reversed his initial conviction and said he was not guilty of offending religious feelings because his intention was not to ridicule the church beliefs. He was just drunk .
In the case of Carlos Celdran, Gutierrez said:

“I would assume, the decision (of the judge) zeroed in more on his action – the mode he had adopted to get his particular message across, the fact that he had disrupted a mass – more than on his purpose.”

Celdran said he will appeal his case. He had earlier apologized for disrupting an ecumenical service inside the Manila Cathedral two years ago by holding up a sign with the word “Damaso” on it and yelling at senior Catholic clerics to stop meddling in politics by trying to block the passage of a reproductive health law.
I guess Celdran had also touched a sensitive spot. The Church would rather forget the oppressive role it played during the Spanish colonial period, which national hero Dr. Jose Rizal had satirized in the two novels that the Church also tried to ban from being read in schools.   Celdran twisted the knife in by dressing up like Rizal on the day he was executed for crimes against the State and the Church.
The one-man protest landed Celdran briefly in jail, which he cut short by posting bail.
Celdran then said:

“I really am sorry for the method but I hope you heard my message loud and clear. My message is unapologetic. But for interrupting the mass and ruining your day, sorry about that.”

Gutierrez noted that theoretically, Celdran can post bail despite his conviction, “while he is appealing the case.”
x x x."
Posted by Atty. Manuel J. Laserna Jr. at 5:12 PM